A musical celebration of those who put aside their differences in the true meaning of Christmas: “Peace on earth, and good will toward men.”

The Time: Christmas, 1914. The Place: Somewhere along the lines between the German and British Armies, World War I.

Many have heard the story of the unusual, unofficial truce occurring in the trenches and spaces in between on Christmas Eve and Christmas Day. The soldiers in these trenches were so close that they would call out to each other. In the black humor of war, they might put up a sign that said “Missed Me!” or “Shoot A Bit More Left!”

Under gray skies and freezing rain, a most curious thing occurred. No one knows just how it started. Perhaps it was just one man, homesick and missing his family during the holiday, who started to sing. In these close quarters, everyone heard it. Maybe this young man was gifted with an extraordinary voice, or maybe it was just the spirit of Christmas, but soon the singing filled the air, followed by makeshift decorations and shouts of “Merry Christmas!” Before too long, the officers in the two companies declared a truce that lasted for as long as a week. Hundreds of letters home from the front would tell the tale, and soon the whole world knew. Just imagine the reactions back home hearing this remarkable news.

The miracle of the few days of this “Christmas Truce” is the plot of our musical play, “Silent Night.” The play explores this magical event as it grew in the hearts of the men who put aside their weapons and rejoiced in the true meaning of Christmas: “Glory to God in the highest, and on earth, peace, and good will toward men.” 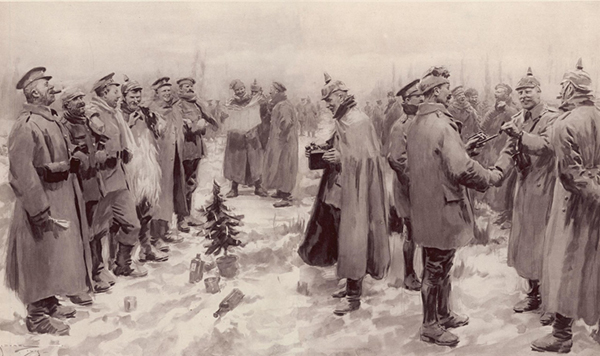