Stephen Lang, award winning playwright, stage and screen star, brings the stories of eight different men to the stage in a one-man show that will reach into your very soul and keep you thoroughly spellbound:

Commended for film portrayals of Babe Ruth to Stonewall Jackson to AVATAR’s Col. Quaritch, Lang began his career on Broadway and maintained a managing role at the Actor’s Theatre.  It is through Lang’s stage adaptation of Beyond Glory that he has reached his most memorable, his most brilliant work. Beyond Glory enjoyed a celebrated run on Broadway and in Chicago’s Goodman Theater; Lang is now taking it coast to coast.

Beyond Glory presents the stories of eight veterans from World War II, Korea, and Vietnam, rendering first hand accounts of valor which resulted in the nation’s highest military award, the Medal of Honor.  As a tribute to fallen soldiers, Lang performed the show on military bases, and gave a command performance on the floor of Congress with Medal of Honor recipient Senator Daniel Inouye of Hawaii in attendance.

The oral histories of these eight men are brought to life through Lang’s commanding performance, with a backdrop of video screens which occasionally evoke the turmoil of combat. Lang subtly moves through each man’s story with a slight alteration of posture and vocal coloring to suggest a new personality.  This illusory magic suggests the magnitude of this performer, the brilliance of his talent that will light up your stage with one of the most memorable presentations you will ever have the honor of presenting. ‍

Stephen was born in New York City, New York, to Theresa (Volmer) and Eugene Lang, a prominent businessperson and philanthropist. He is of Hungarian Jewish-German Jewish (father) and Irish-German Catholic (mother) descent. He is married to Kristina Watson, a costume designer and teacher, with whom he has four children.

A stage actor of great recognition, Stephen Lang has shaped a formidable career on and off the various stages of the United States and abroad. Though he is arguably most well-known for his acclaimed performance in James Cameron's Avatar (2009), Lang began his career in theater. Broadway roles include his Tony-nominated performance as Lou in "The Speed of Darkness", Happy in the Dustin Hoffman revival of "Death of a Salesman", Colonel Jessep in "A Few Good Men", and Mike Tallman alongside Quentin Tarantino and Marisa Tomei in "Wait Until Dark".

Off-Broadway credits include John Patrick Shanley's "Defiance", Anne Nelson's "The Guys", Arthur Miller's "Finishing the Picture" and his own play, "Beyond Glory", for which he received numerous accolades. The play premiered in Washington, D.C. and has played the Goodman Theatre in Chicago, the Roundabout in New York City and a USO tour to various military bases and battleships around the world. In the fall of 2010, Lang received the Patriot Award from the Medal of Honor Society in honor of his theatrical and charitable works for the United States military.

He has been nominated for and won numerous awards including the Grace Prize, Outer Critics Circle, Drama Desk, Helen Hayes, and Tony Awards, as well as acting prizes at 2010's VisionFest and the Buffalo Niagara Film Festival.

"An actor the caliber of Lang is not easily accessible, and the subject matter of this project intrigued me.  It was noble and allowed me the ususal opportunity to really connect with and engage the active duty military and the veterans in our community.  At particularly rousing moments during the performance, several of the vets in the theatre were shouting encouragement and support from the audience!  At the very quiet pensive moments, when tghe uncontrollable coughing usually starts, it was stone silent.  Lang had the audience capivated and mesmerized by his performance.  At the very end, you could literally hear a pin drop, and then people jumped to their feet with spontaneous applause.  What a stellar performance, and a once in a lifetime experience!
‍— Emily Brickler, Missouir University of Science and Technology, Rollo, MO
‍

"Mr. Lang's one-man play is no simple-minded piece of flag-waving.  It is an unsparingly direct portrait of men at war, pushed into narrow corners and faced with hard choices. It is also one of the richest, most complex pieces of acting I've seen in my theatergoing life."
— Terry Teachout, Wall Street Journal
‍

“Adapted by Mr. Lang from a book by the journalist Larry Smith containing the oral histories of veterans of several wars, Beyond Glory allows the voices of servicemen to be heard without the filter of the conventions of drama or the prerogatives of deadline-driven journalism. Its sobriety, simplicity and lack of histrionics are the show’s signal strengths.”
— Charles Isherwood, The New York Times
‍

”What makes a reluctant warrior - a man able to kill for his country and come out a hero? It’s a question that gets answered with remarkable poignancy in Beyond Glory, Stephen Lang’s stirring examination of the lives of eight men who received the Medal of Honor for their bravery in World War II, Korea and Vietnam.  Lang, who adapted the evening from the book Beyond Glory by Larry Smith, lets these military men speak for themselves in this spare yet emotional 80-minute evening of theatre.”
— Michael Kuchwara, Associated Press
‍

"Recipients of the Medal of Honor, each of these men went above and beyond the call of duty to a place where bravery and humility meet. In a stunning tour de force performance, actor Stephen Lang leads us on a journey through WWII, Korea and Vietnam, taking us to a realm beyond."
— Broadway.com
‍

“Stephen Lang has always had that fanatical glint in his eye …. Inasmuch as he is the sole actor [in Beyond Glory] the glint gets to occupy the stage unchallenged for 80 heroic minutes [as he presents] eight heroes who survived three wars (in Europe, Korea, and Vietnam) and represent different ethnic groups, social strata, and regions.  Ages and accents also differ from one hero to the next. Lang manages all this impeccably, finding both the differences and the similarities among these men. He has idiosyncratic readings that fall compellingly into place; dynamic range and, where needed, speed of delivery that are enormous; also gestures and facial expressions that are arrestingly idiomatic.”
— John Simon, Bloomberg‍ 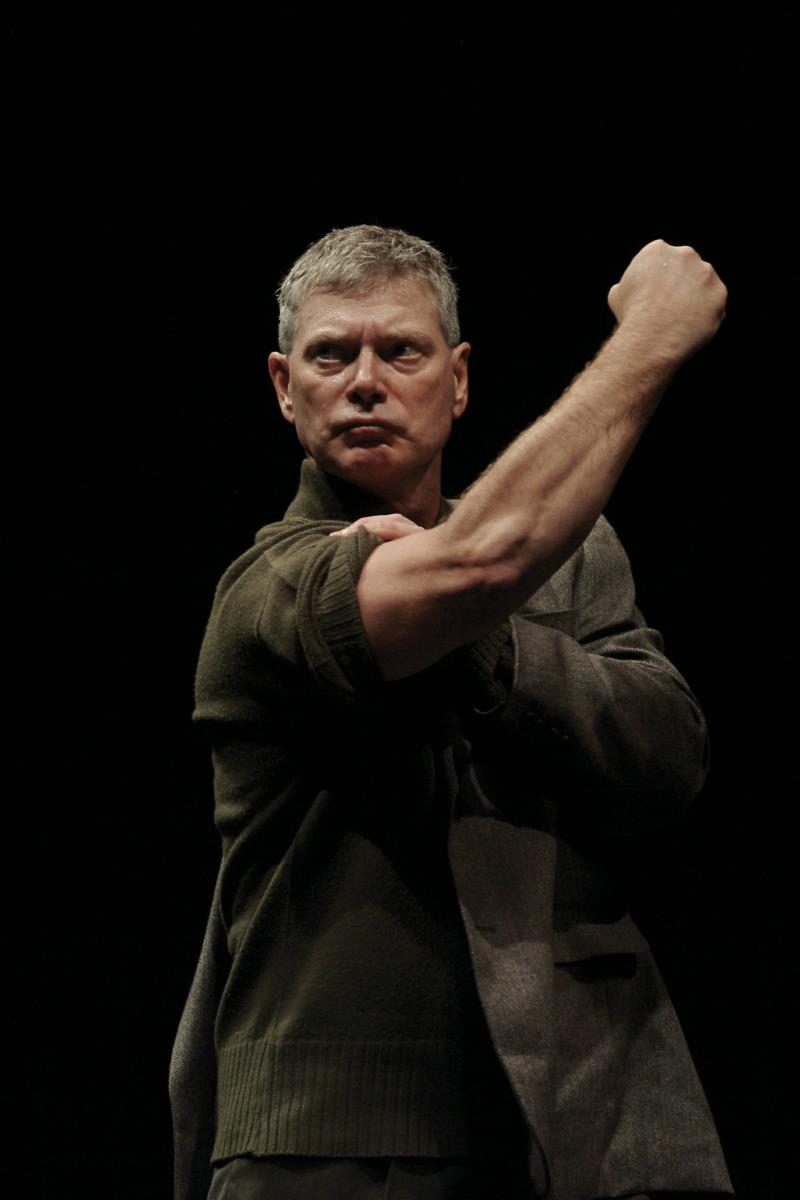 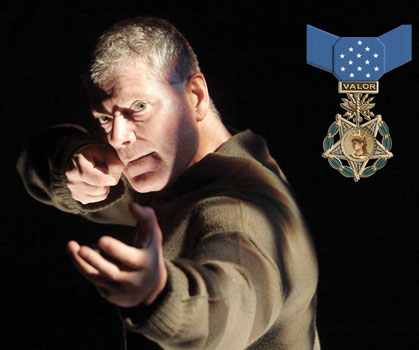 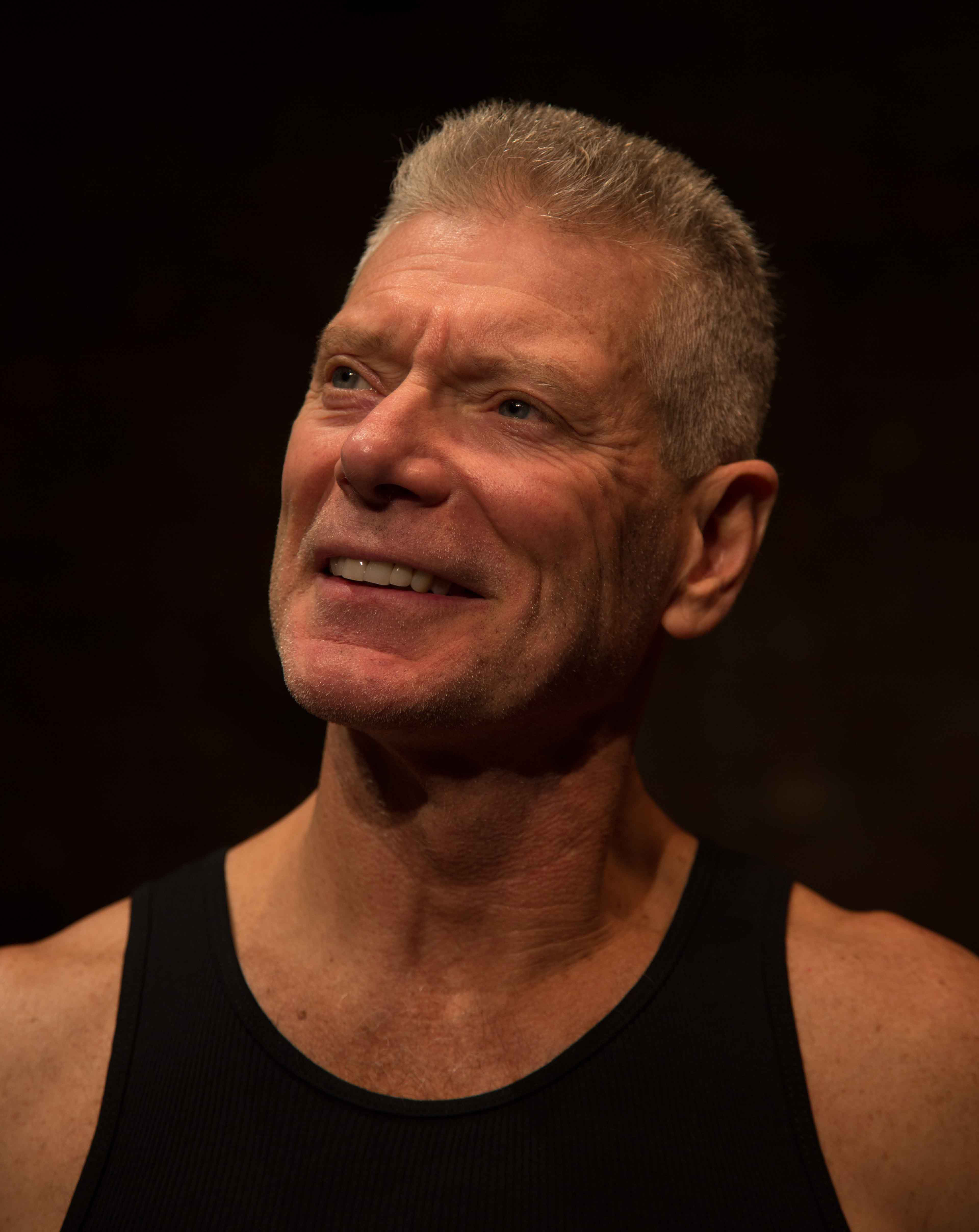 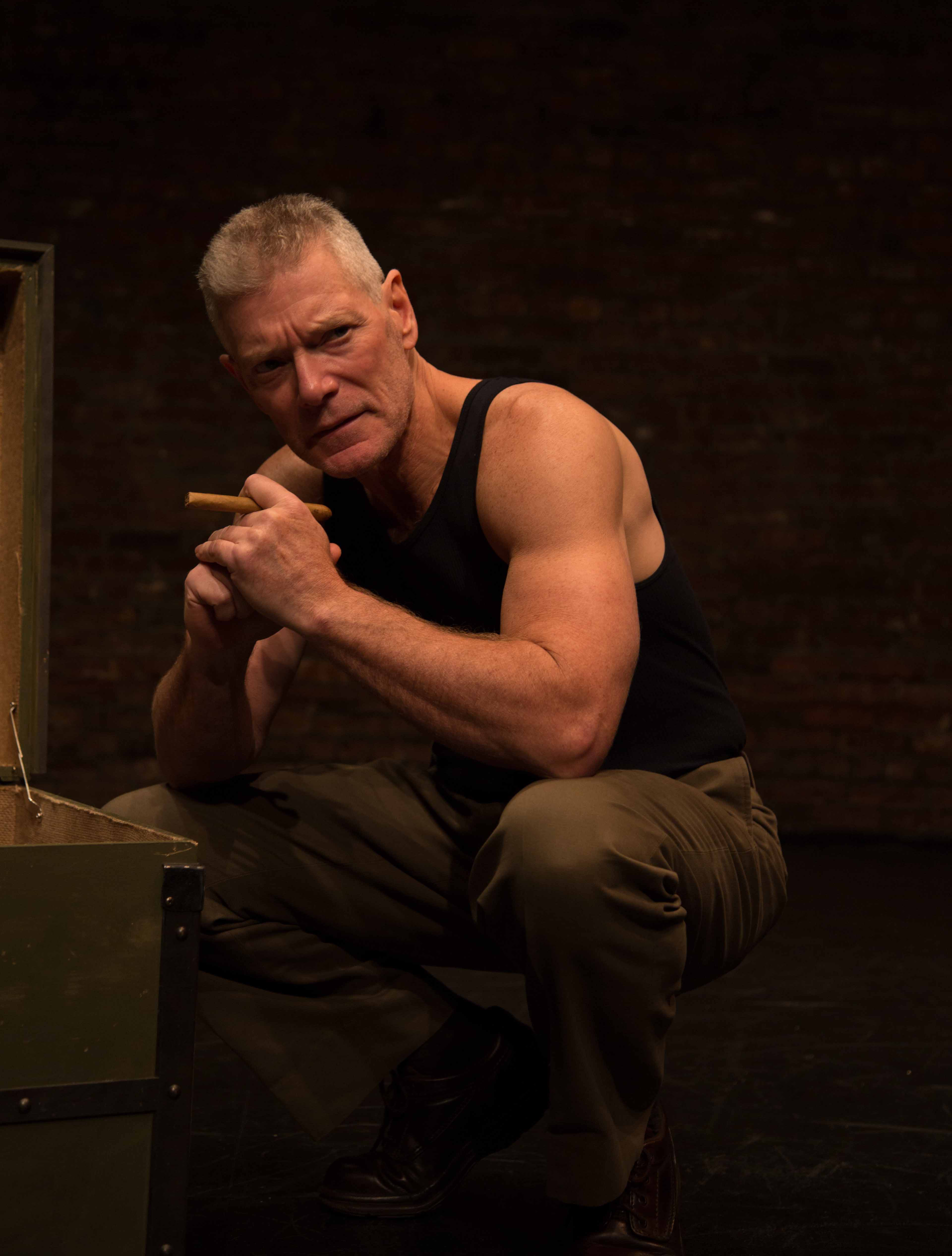 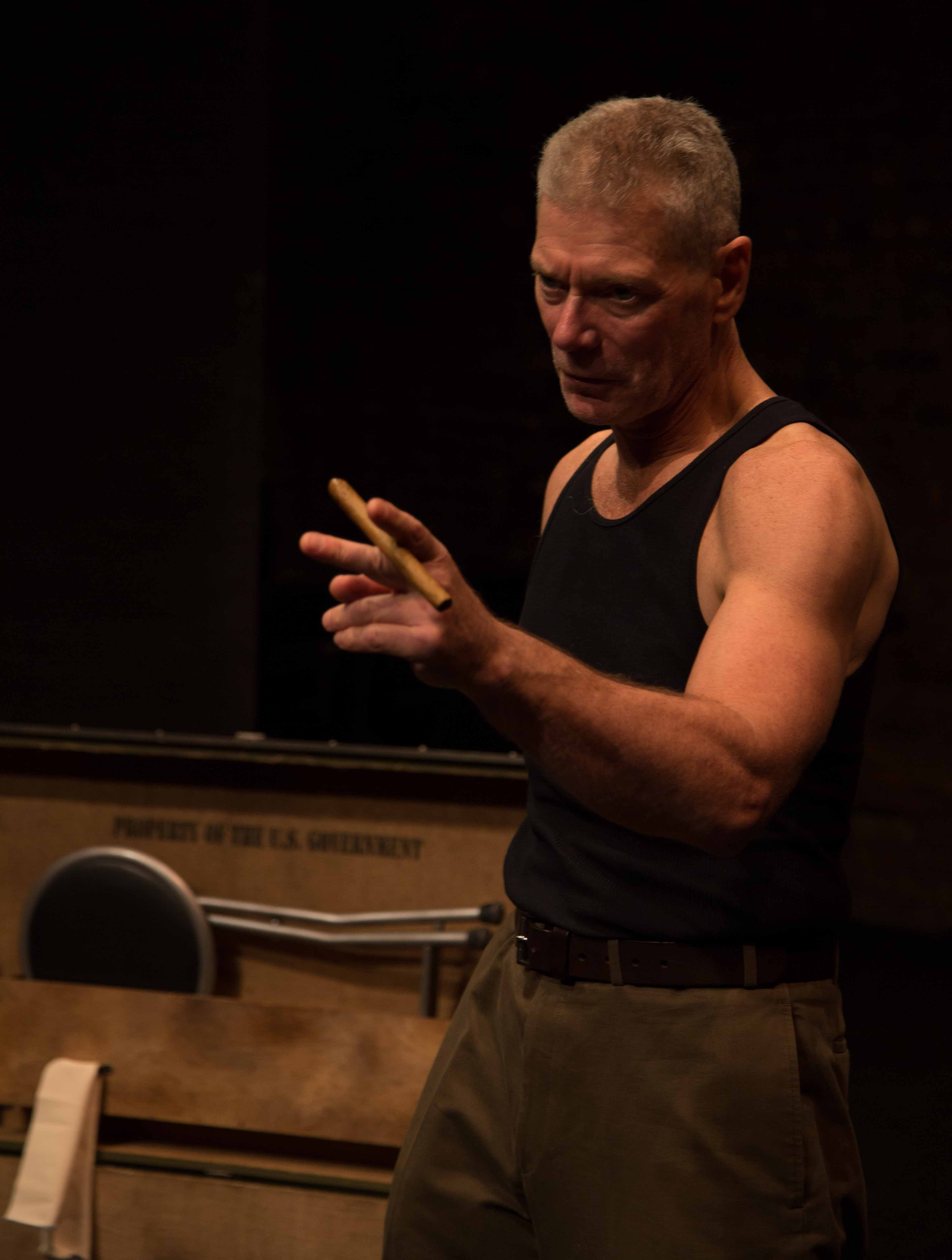 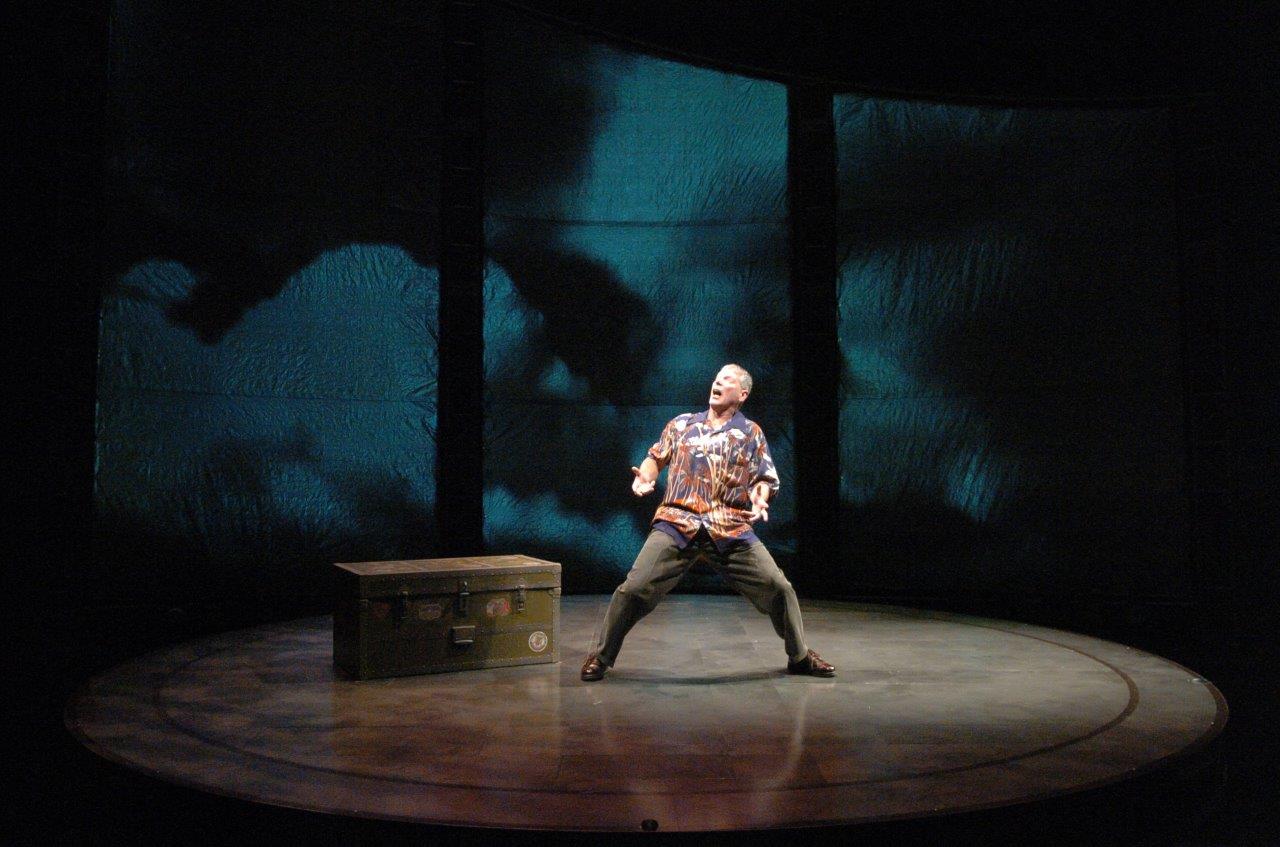 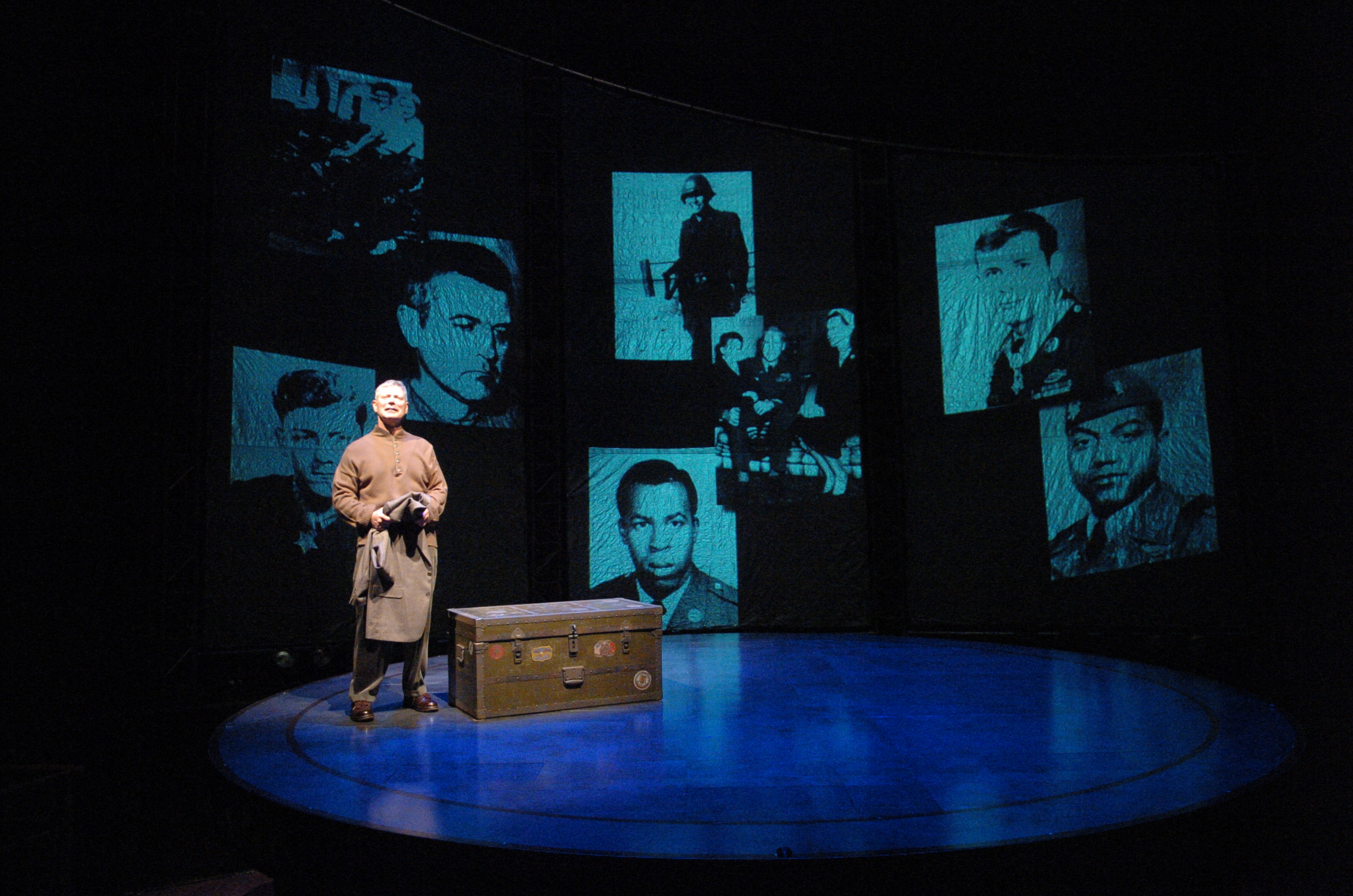